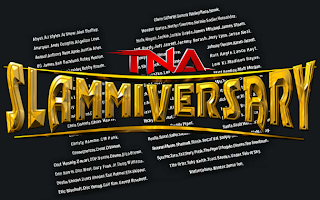 This weekend marks the 10th Anniversary of TNA (despite the company being founded slightly before). I always thought Slammiversary should have been their flagship PPV on-par with WWE's Wrestlemania, but that honour goes to Bound For Glory coming this October. Anyway, let's have a look at what's in store this Sunday in Texas!

If anybody knows a reason for this match, can they please inform the rest of us! A random match, added to the card at the last minute, featuring two wrestlers that haven't been on television for months. It's good to see these guys being used on a PPV, but to just randomly throw them on to what is one of the biggest shows of the TNA year makes no sense at all.

Prediction: Hernandez to start another push

In a rematch from last month, Miss Tessmacher (forget the Brooke part, that honour now goes to Hulk Hogan's daughter) gets another shot at the gold. Another match which was set up coming out of last week's episode of Impact Wrestling, so it's hard to gauge what to expect from this match. At least their original match at Sacrifice had weeks of build up. Gail Kim has held the belt for a while now, so I wouldn't be surprised to see Tessmacher get the win. Although, I really did think it would be Velvet Sky to get the win over Kim in the end.

Prediction: Miss Tessmacher to get the win (to have a title change on the card)

Firstly, does anyone actually care that Robbie E is obsessed with the Television Title? I suppose it's good that someone is, but in doing so, he is ignoring the fact that he could have a legitimate chance at tag team gold with Big Rob. This match has been set up over the course of numerous run-ins. However, it would have made far more sense to book it as a four way dance for the Television Championship. Garret Bischoff has been included, presumably due to the interference in his match (and that Jeff Hardy has better things to do with his time).

Prediction: Devon and Bischoff to pick up the win, not that it matters

One of the only matches on the card that has had some build up, despite the fact that one character isn't meant to be a wrestler. It will be interesting to see how this match pans out, as it could be a total beat down on Park to draw out the storyline. Alternatively (and far more likely), he could channel his 'brother' Abyss and give Bully a run for his money.

Prediction: Bully Ray in a one sided beat down

A match seemingly set up after Austin Aries accidentally sprayed Samoa Joe in the face with water on his way to the ring. Despite it's random beginnings, this should be the match of the night, with two of the best wrestlers in the company going head to head. Joe has cut a promo online intimating Aries is hiding behind rules as not to defend his belt, which leads me to believe this could also be the main event of Destination X but with the belt on the line.

Prediction: Joe to beat Aries in an epic encounter to set up a rematch next month

One secret and a ton of interference has lead to this match, which wouldn't have crossed anyone's minds a couple of months ago. However, this has the potential to be match of the night. The four individuals involved are some of the best TNA have to offer and although they all should be doing better in singles competition, this match has the ability to showcase them and remind the fans of what they have.


It's a shame that the tag team division has no actual teams (RIP MMG) to compete for the belts, but hopefully these pairings can make other wrestlers adopt the ROH mentality that everybody should have a partner. In a perfect world, we will soon see a return of former Champions, Joe and Magnus, in the near future.

Prediction: The Champs to retain as they have only held the belts a month and I feel there is still further to go in  this story

A last minute addition to the card featuring three main events talents who've spent the best part of 2012 challenging each other for opportunities to compete against Bobby Roode for the World Heavyweight Championship.

Despite the star names, this match was actually given away on free television just a couple of weeks ago. Unfortunately, this was only a mediocre match at best and since all three were involved in the fan vote for the Television Title, suggests that nobody actually knows what to do with any of them at the time of writing. Rob Van Dam won this match last time, so maybe somebody else will be given a chance.

Prediction: Jeff Hardy wins via pinfall to get his title shot on next week's Impact Wrestling

Sting returned several weeks ago, during Bobby Roode's victory celebrations for becoming the longest reigning World Heavyweight Champion in TNA's ten year history. He subsequently went on to defeat the Champion in a Lumberjack match on the first live episode of Impact Wrestling to become the number one contender.

There is long storied history between these two, so despite it appearing to have been booked last minute (as with the rest of the card), there is genuine history here stemming from when Sting was General Manager, so the contender will be looking for some well-deserved revenge for the torment he suffered earlier in the year.

The opponent everyone wants to see go up against Bobby Roode is former Beer Money tag team partner, James Storm. However, judging by the recently announced PPV specials documenting the feud, this wont be happening until Bound for Glory at the earliest. The real question is whether Roode will carry the belt the entire year or if the Icon Sting will be given one last hurrah on the biggest stage before he retires? Both are plausible booking options.

In closing, the card is incredibly stacked, but with little build up to the majority of matches, it's hard to know what to expect. Some matches have the potential to be excellent, while quite a few seem like TV matches thrown in to fill out the card. This PPV also features the announcement of the first inductee to the TNA Hall Of Fame and a surprising cameo appearance from current WWE Intercontinental Champion (and former NWA: TNA World Champion), Christian Cage! Tune in this Sunday to see how it all goes down!

As written by: @Robbie_G_CH
As editted by: Mark Clements
Posted by Canned Heat Wrestling at 16:24